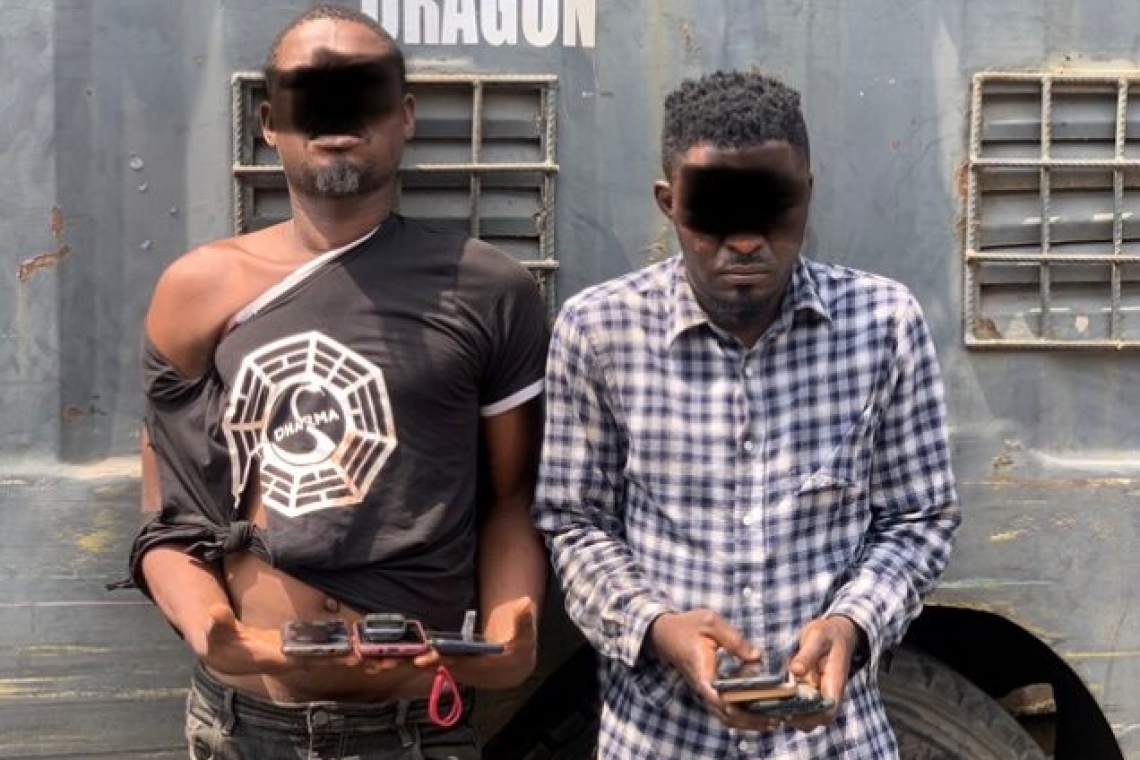 ...as suspects confessed to making 80k daily from pick pocketing

In line with the commitment of the Lagos State Taskforce Chairman, CSP Shola Jejeloye to make the State uninhabitable for all criminal elements, operatives of the Agency have arrested two suspected serial pickpockets who disclosed that they make 80,000 Naira daily from their operations, using commercial vehicle (Danfo) as a guise.

The suspects, one SodiqOlagoke, 25, and Lucas Patrick, 26 were both arrested by operatives of the Agency after they had dispossessed eight unsuspecting commuters of their phones around Oshodi/Ikeja Along axis.

According to CSP Shola, the Taskforce officers who made the arrest disclosed that the suspects who were roving the said axis in their Danfo commercial bus looked suspicious and noticed both the driver and the two male passengers seemed uneasy after driving past the officers.

“We kept on their trail for a few minutes before double crossing their vehicle at Oshodi, leading to all three occupants taking to their heels. Two out of the three suspects were arrested with the assistance of passers-by around and we found eight different mobile phones belonging to different unsuspecting passengers who boarded their vehicle”, the officers said.

One of the suspects, Sodiq who claims to be a painter by profession said that he has been in the pickpocket business for over a year and boasts of a daily bounty of 80,000 Naira per day which he splits with his partner in crime. In his words, “We operate mainly on Tuesdays and Fridays because those are the busiest days of the week and there is usually a lot of hustle and bustle at the bus stops”.

“Passengers who make use of their phones while in our bus are usually falsely alerted by the conductor that there is a fight going on in front which would make the passenger pocket the phone then we steal it”, he added.

The second suspect, Lucas Patrick who plays the role of the driver also disclosed that pick pocketing is a very lucrative business for him. “We make a lot of money from it but unfortunately we spend our proceeds on drinks, women and gambling”, said Patrick.

Patrick also said that “I was originally a driver of a Danfo bus but when I came across Sodiq one day when he operated successfully in my bus I decided to go into partnership with him. I drive him around while he steals the phones from the passengers”.

The Agency boss has further enjoined Lagosians to be vigilant and conscious of their environment at all times and also ensure that all suspicious moves are reported to the Agency or to the nearest Police Station.

Meanwhile, the Agency is seriously on the trail of the buyers of stolen phones as they complete the chain of trade in the illicit pickpocket business. Suspects will be charged to court at the conclusion of investigation.