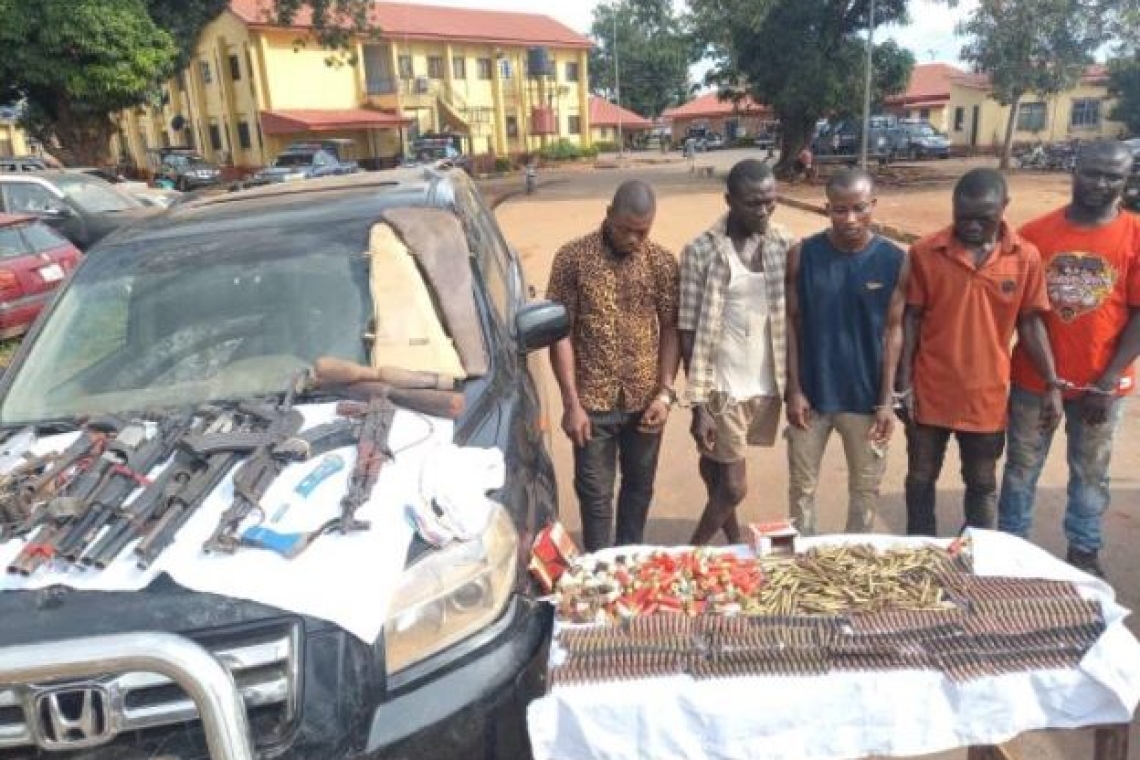 Police in Ogun State have arrested five (5) dreaded suspected cultists who have been on the wanted list of the command in their hideout along Molipa road ijebu ode while planning another violent attack. The suspects, Segun Olabiyi aka Koleje, Musa Atanda aka Musa SARS, Olorunjuedalo Adewale, Olamide Odewole and Peter Anuoluwapo Akinyemi were arrested based on intelligence led policing by detectives of Obalende Divisional Headquarters in Ijebu Ode.

The Command Spokesperson, DSP Abimbola Oyeyemi in a press statement said that credible intelligence available to the Police revealed that some hoodlums who are members of Aiye confraternity were gathering in groups at the back of De prime hotel in preparation for a deadly attack, acting on this, the DPO Obalende Division, SP Salami Murphy mobilized his men and headed to the scene. Adding that the hoodlums on sighting the policemen, engaged them in gun battle but were subdued by the superior firepower of the policemen which eventually led to the arrest of five amongst them while others escaped with various degrees of bullets injuries. One locally made short gun, two live cartridges and assorted criminal charms were recovered from scene.

DSP Oyeyemi stated further that further investigation has revealed that the suspects were actively involved in various cult clashes that had claimed many lives including that of a serving policeman Sgt Akeem Oseni attached to Igbeba Division. And that their trademark according to their confession is to cut off the right hand of their victims after killing them. The suspects also confessed to have involved in some robbery operations in Ijebu Ode and its environs and that one of their prominent leaders simply known as PERTH was killed in one of the robbery operations.

Meanwhile, the Commissioner of Police, CP Lanre Bankole, who applauded the gallant and professional performance of his men has directed that the suspects be transferred to the State Criminal Investigation and Intelligence Department for discreet investigation. He also charged his officers to take the battle to the doorsteps of all known criminals in the State, in order to make Ogun state a peaceful place for all.