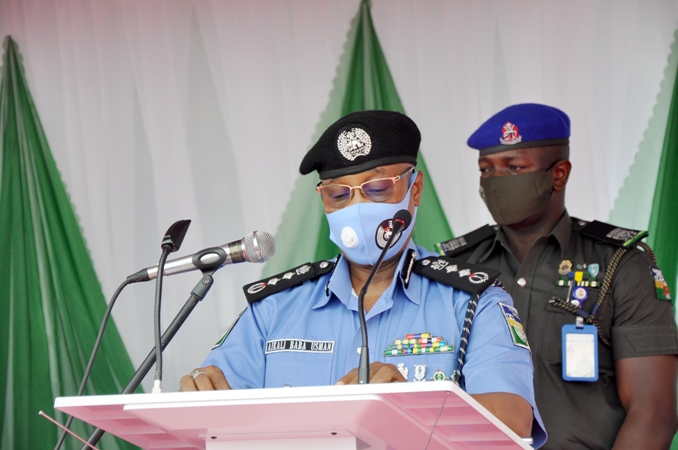 By ASP Ahekohimbia A. Tana.

The Inspector-General of Police, IGP Usman Alkali Baba, psc(+), NPM, fdc, on Thursday, 28th October, 2021, was at the Briefing Room of the Press Office, State House, Aso Rock Villa, Abuja, for the State House briefing on the activities of the Nigeria Police Force including its challenges and salient achievements under the administration of His Excellency, President Mohammadu Buhari, GCFR.

The IGP who laid emphasis on the reward and punishment policy thrust of his administrations as the 21st Indigenous Inspector General of Police, gave a powerful presentation on the challenges bedeviling the force and how these challenges are being surmounted by the current Management of the Nigeria Police. He stated expressly that the security situation in the country has been significantly stabilized despite the occasional isolated cases of crimes and threats to public safety, peace and security in some parts of the country. He stressed that the Force is currently collaborating with the Armed Forces, the Department of State Services (DSS) and other security and intelligence agencies in the country to spur a common front aimed at reducing crime and criminality nationwide.

The IGP rolled out the current geo-mapping of crime in the country and the  various measures the Police have put in place to arrest the trend of crime and criminality which includes Operation Puff Adder II aimed at reinforcing the fight against banditry, kidnapping, armed robbery and other violent crimes in the North-West and North-Central parts of the country; Operation Restore Peace in the South-South and South-East regions launched to ensure public safety, public order and constitutional authority in the area; expanded intelligence-led operations; intelligence sharing amongst key security agencies; community engagements and public engagements to weaken recruitment drives of criminals with programmes such as Police Campaign against Cultism and Other Vices (POCACOV); and the deployment of technology through the Nigeria Police National Command and Control Centre (NPF-C4i), Nigeria Police Crime and Incident Database (NPC&IDB) Centre, amongst others.

The IGP proceeded to introduce in a colourful way the NPF Rescue me app which he said is available on both android and ios platforms for the reportage of crimes, unprofessional conducts of Police Officers, and to contact an ambulance in the case of an emergency.

Amongst the measures emplaced to tackle crime is the deliberate and well-coordinated mop-up of illicit weapons in a bid to curtail small arms and light weapons (SALW) in the country. This includes raids on the factories were such weapons are being manufactured locally, blockage of supply chains and routes across the country, and collaborations with international organizations such as INTERPOL, AFRIPOL, WAPCO, and the IPS.

Some of the achievements of the Nigeria Police during the period under review according to the IGP, include the arrest and ongoing prosecution of 7,036 notorious criminals suspects - 155 suspected terrorists/secessionists; 1,243 suspected kidnappers; 1,845 armed robbery suspects; 1,445 for cultism; 1,183 for murder; 1,110 for cybercrime; and 1,165 for rape and other sexual and gender based violence. The recoveries made under his administration includes 1,717 sophisticated firearms; 341 stolen vehicles; 39,541 live ammunition and the rescue of over 934 kidnap victims unhurt. Asked what the Police is doing about the spate of kidnapping, he stated that the Police have been advocating for non-payment of ransom, however this in most cases lead to situations where people do not want to report to the Police. He said however that the Police has mitigated kidnap instances. He however insisted that the necessary tools to tackle the menace, swift dispensation of justice and adequate technological hardware are keys that would improve the fight against kidnapping.

According to the IGP, the Police currently have over 20,000 active cases at the various courts in the country while over 1,570 convictions have been secured by the Force Legal Section, Abuja only. Some of the key convictions highlighted by the Chief of Police include the upholding of the death penalty for the serial killer, Gracious David-West, who was convicted for the 2019 multiple murders of about 19 females in Port-Harcourt, and the death penalty awarded to both Suleiman Goma and Haruna Idi for the kidnap and murder of a former Vicar-General of Otukpo Diocese, Rev. John Alexander Adeyi, by the Makurdi High Court.

The #EndSARS protest was not left out of the IGPs presentation as he acknowledged the role it played as a catalyst for change in many sectors of the NPF. The Inspector General of Police noted that some of the demands made by protesters have been met while others are being worked on in the interim. For example, he noted that all protesters arrested during the #EndSARS protest were profiled, screened and released unconditionally except those implicated for murder, malicious damage, theft & other serious offences; that the Force Medical Department was immediately empowered to carry out psychological evaluation of police personnel disengaged from the defunct Special Anti-Robbery Squad (SARS); and that the Salary and Wages Commission is working out a new salary structure for the NPF as directed by the President, His Excellency. Mohammadu Buhari, GCFR.

He however noted that the Special Weapons and Tactics Unit (SWAT) created upon the disbandment of the Special Anti-Robbery Squad (SARS) is not yet fully operational due to budgetary constraints as the new unit requires specialized kits, weapons, vehicles etc. In the meantime, he pointed out that other tactical investigative teams such as the Intelligence Response Team (IRT), Special Tactical Squad (STS), Rapid Response Squad (RRS), etc. are filling the void created by the disbandment of SARS.

The IGP closed the #EndSARS chapter by giving a summary of the human and infrastructural losses suffered by the Police. Police Officers who were gruesomely murdered during the protests were thirty-seven (37) in number while the estimated financial cost incurred from the loss of Police infrastructures was put at N18.5bn. A pictorial glossary of the 37 officers from the rank of Chief Superintendent of Police (CSP) to Police Constable (PC) murdered during the protest was shown by the IGP.

The Police Chief went on to highlight the heights achieved in the area of police reforms with respect to the passage of the Police Act, 2020. Foremost is the IGP’s deliberate protocol to identify, elevate and position professionally competent officers to strategic positions, general and specialized trainings for officers, one of which is the currently concluded training for Police Public Relations Officers (PPROs) in both Lagos and Kano states organized in collaboration with a German development agency, GIZ.

IGP Usman Alkali Baba reiterated the commitment of his administration towards improving the general welfare of Police officers via the barrack redevelopment scheme and the establishment of affordable housing for its personnel.  Police officers, both serving and retired, have also been captured along with their families for the National Health Insurance Scheme while the Police Medical Services is improving its services with the construction of more police hospitals. He pointed out that a Bill to facilitate the exit of the NPF from the contributory pension scheme is currently before the National Assembly, while the Police has revived its scholarship foundation and intend to incorporate the Nigeria Police Insurance Company to meet the needs of Police Officers particularly the injured and the deceased.