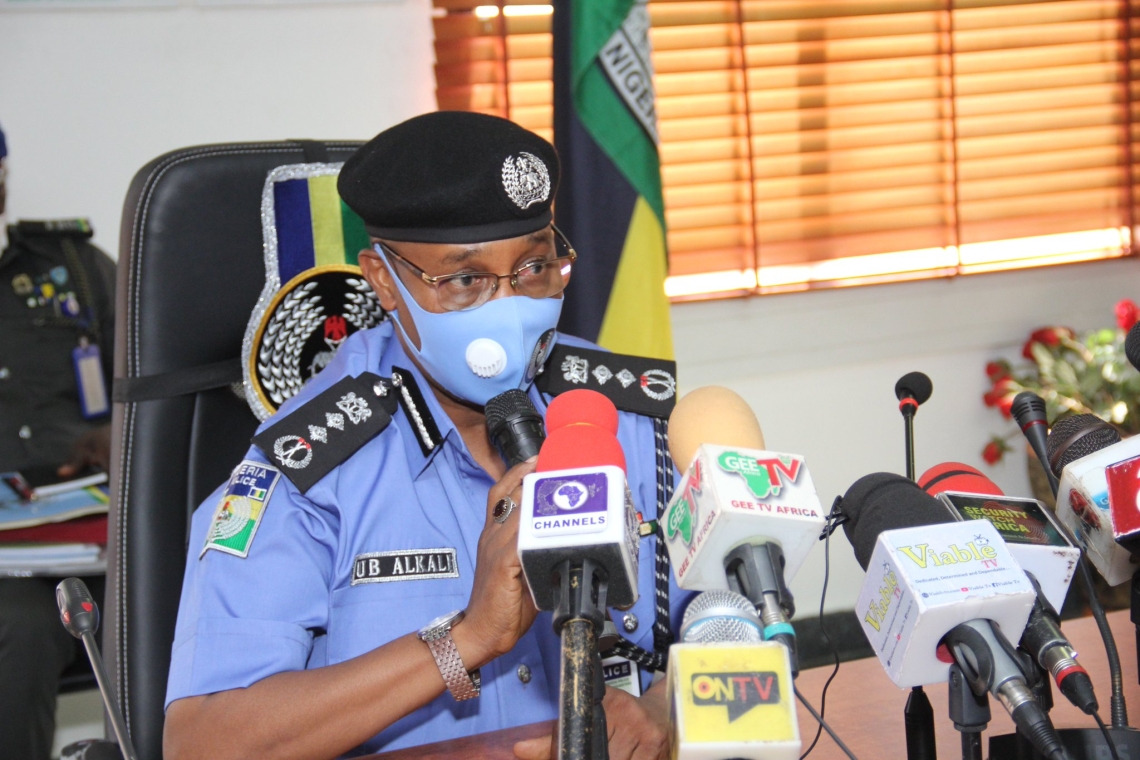 The Inspector-General of Police, IGP Alkali Usman Baba psc (+), NPM, fdc, has urged officers of the Nigeria Police Force to remain motivated for the task of policing Nigeria in 2022. He said this while appreciating the commitment, dedication, loyalty and sacrifice of police officers in the course of their day to day work in spite of the peculiar occupational hazards of policing Nigeria.

At a meeting held with strategic Police Managers at the Peacekeeping Hall, FHQ, Abuja, on the 13th December, 2021, the IGP appraised the activities and performance of the Nigeria Police Force in the year 2021, with  a view to identify gaps and limitations that may have affected the set objective of optimal service delivery to Nigerians and adopt strategies to bridge them in 2022.

IGP Alkali told his audience that the achievements of the Police were enormous though the sacrifice  has been enormous too. He enjoined officers to rededicate themselves for the challenging months ahead, especially as we move towards Nigeria’s election year of 2023.

The IGP remarked that the activities of bandits, secessionist elements, kidnap syndicates and other highly organized criminal groups which posed threats to internal security in 2021 were compounded by the #EndSARS violence of the precedening year. He commended the heads of Police formations and Police personnel across the country for their resilience, courage, initiative, and loyalty to the Force and the country inspite of these nagging challenges.

He highlighted that the force, as part of concerted effort to stabilize the internal security order, undertook several high-profile special operations leading to the prevention of crimes and neutralization of numerous criminal elements. “We have also deepened our capacity to deploy intelligence to support police investigation and operational activities” he added.

Lauding the resilience, patriotism and exceptional operational performance displayed by police personnel deployed for the 2021 Anambra Gubernatorial election, the IGP noted that the successful conduct of the election was a testament to the professionalism and effective operational action plan of the Nigeria Police.

The IGP who itemized other major strides of the Force within the year 2021, appreciated all members of the Force for the modest successes and called on the strategic police managers to gird their loins and brace up for the anticipated internal security challenges that the year 2022 will, undoubtedly, present, citing the fact that it is a year preceding the general elections, likely to be fraught with a charged political landscape which will further test the professional will and operational competence of the Force. “What this translates is that we will not only be dealing with traditional crimes, our capacity as the lead agency in internal security management  will no doubt be stretched to cover the management of threats that will be associated with an active political space in year 2022” he said.

He further, charged the heads of Police formations to imbibe the virtues of professionalism, respect for rule of law as well as respect for the rights of citizens and warned against excessive and unjustifiable use of force on the citizenry. “my policing vision is built on the virtues of professionalism and respect for rule of law and citizens right, therefore, you should continue to provide strategic leadership that will remain sensitive to issues of rights violations and excessive and unjustifiable use of authority” he said.

Also, in response to the persistent reports of professional infractions by some police personnel in various commands across the country, the IGP directed the Force Provost Unit, X-Squad and the Monitoring Unit to jointly commence a special operation across the country with a view to monitoring police conducts, especially during the festive season, and enforcing professional standards as citizens transit in and around the country.

The IGP while reassuring the citizens and the nation at large of the unwavering determination of the Force to ensure a safe, secure and peaceful 2022, called for improved understanding, partnership and working relationship between the Police and the citizens especially in the area of volunteering information to aid police capacity in securing the public space in the most pro-active manner this year and beyond.