2 in Police Net Over Kidnap of Catholic Priest

The operatives of the Nigeria Police Force Intelligence Response Team (IRT) have arrested a total of 47 suspects in connection with cases ranging from Criminal Conspiracy, Armed Robbery, Kidnapping, Murder, cattle Rustling, Possession of Prohibited Firearms, Burglary and Stealing. Amongst the exhibits recovered from them are: One (1) GPMG, twenty-two (22) sophisticated firearms and weapons of different calibre, five hundred and twenty-five (525) ammunition, one (1) hacksaw, and mobile phones.

In a press briefing by the Force Public Relations Officer (FPRO), CP Frank Mba, he noted that one of the cases being paraded was the case of suspects belonging to a very wicked gang that operates in the North-Central and North-Western part of the country. He further said the gang has a strong armoury with three AK47 rifles and two General Purpose Machine Guns (GPMGs) and that the gang is responsible for the kidnap of a Catholic Priest that was sometimes kidnapped in  Kagarko LGA of Kaduna State but eventually was rescued alive after spending three days in their custody. Adding that they were also responsible for several other kidnaps, in which some resulted in the death of innocent citizens. He gave the names of the suspects as; Salisu Abdullahi, ‘m’ 28 and Babangida Usman, ‘m’ 21, both males and natives of Kaduna. One (1) GPMG and three (3) AK47 rifles were recovered from the suspects while effort is still ongoing to arrest other members of the gang.

Similarly, the Police arrested three (3) ex-convicts, Abel Nanfa, ‘m’ 23 yrs, Nankum Wazhi, ‘m’ 32 yrs, and Jonah Patrick, ‘m’ 25 yrs, in Plateau State for their involvement in armed robbery, kidnapping and car theft within the Jos metropolis. Investigations revealed that the suspects, after serving their jail term, returned to their nefarious activities before nemesis caught up with them. The suspects were arrested while trading a Toyota corolla vehicle which they snatched at gunpoint from one of their victims in Jos. One (1) AK47 rifle, one (1) berretta pistol and twenty-one (21) rounds of live ammunition were recovered from the suspects.

In another development, the Police Team arrested one Abubakar Haliru, ‘m’, 48 yrs old, of Zaria LGA in Kaduna State, who lured his cousin, one Binta Mohammed and handed her over to his kidnap gang members in Galadimawa forest in Kaduna State. Binta narrowly escaped from the kidnap gang and thereafter contacted the Police before her eventual rescue. Investigations revealed that Haliru and his gang members are in the habit of taking advantage of family ties to deceive and abduct family members.

“Part of the advice we give to citizens is to note that the first few minutes of every kidnap operation is the most dangerous time. When kidnappers have already gotten hold of you and the kidnap did not take place in a public area where a simple alarm from you could actually cause them to abandon you and run away, you need to exercise a lot of caution. While we do not pray for any of our citizens or visitors in Nigeria to be a victim of kidnapping, you must understand the underlining psychological behaviour of these kidnappers either in the country or outside the country. Once you are in their den, you must weigh your options properly before you make any move. If the conditions are not ripe for you to stage an escape, take your time to ensure you don’t take that risk. You must also know that thousands of policemen and other law enforcement agents out there are doing everything they can to get you out safely and do not do anything that will complicate your rescue”. CP Mba added.

CP Mba also said that the case is still an active investigation as some of the gang members are still at large and that the operatives of IRT are closing up on these suspects. Adding that, all the suspects will be charged to court on conclusion of investigations.

The Inspector-General of Police, IGP Usman Alkali Baba, psc (+), NPM, fdc has assured the nation that the Force will remain committed to cracking down on criminal networks, mopping up illicit weapons in the hands of criminal elements and generally working toward enhancing public safety in the country. The IGP also urged citizens to continue to provide useful information to the police to aid in the crime-fighting efforts. 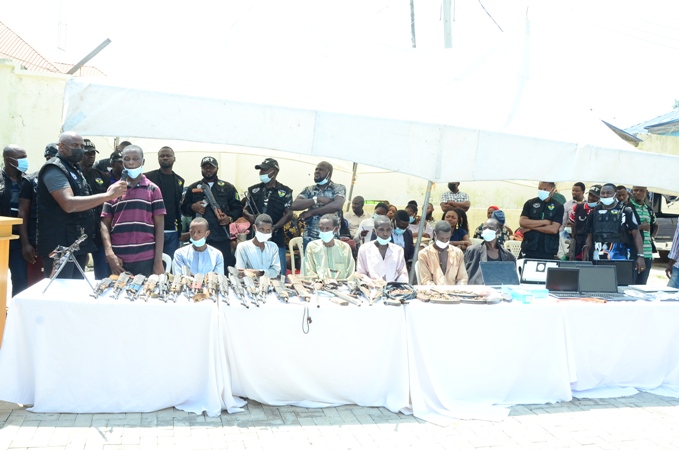 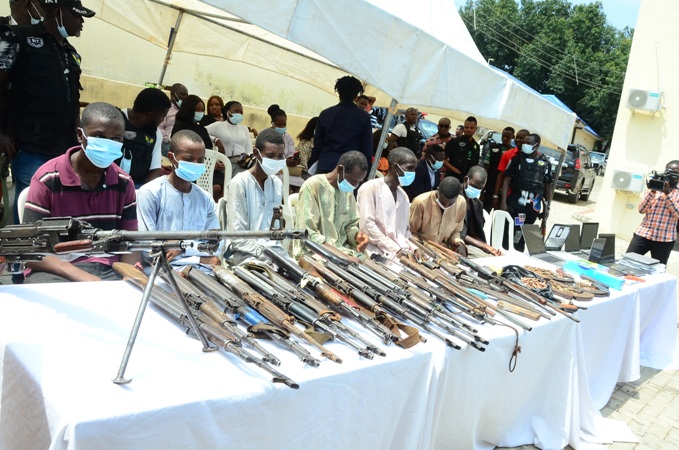